Don’t you love it when you have summer guests?  It’s a sign that the “party is on”.  I’m not much of a party girl myself, but these guests have made this summer very special.

This first guest is not so pretty, in fact he is quite scary if looking close up.  Fortunately you don’t actually see them often since they hang out high in the trees.  I’ve always called these guys locusts, but they are actually cicadas.  But to me, they are the essense of summer, for all day, they sing “the song of summer”.  They come out of the ground annually to mate and die.  Courting is the music or buzzing sound we hear when they vibrate their abdomens.  There are also the 13 and 17-year cicadas, and when they emerge in massive numbers, it is a nonstop chorus in wooded areas. 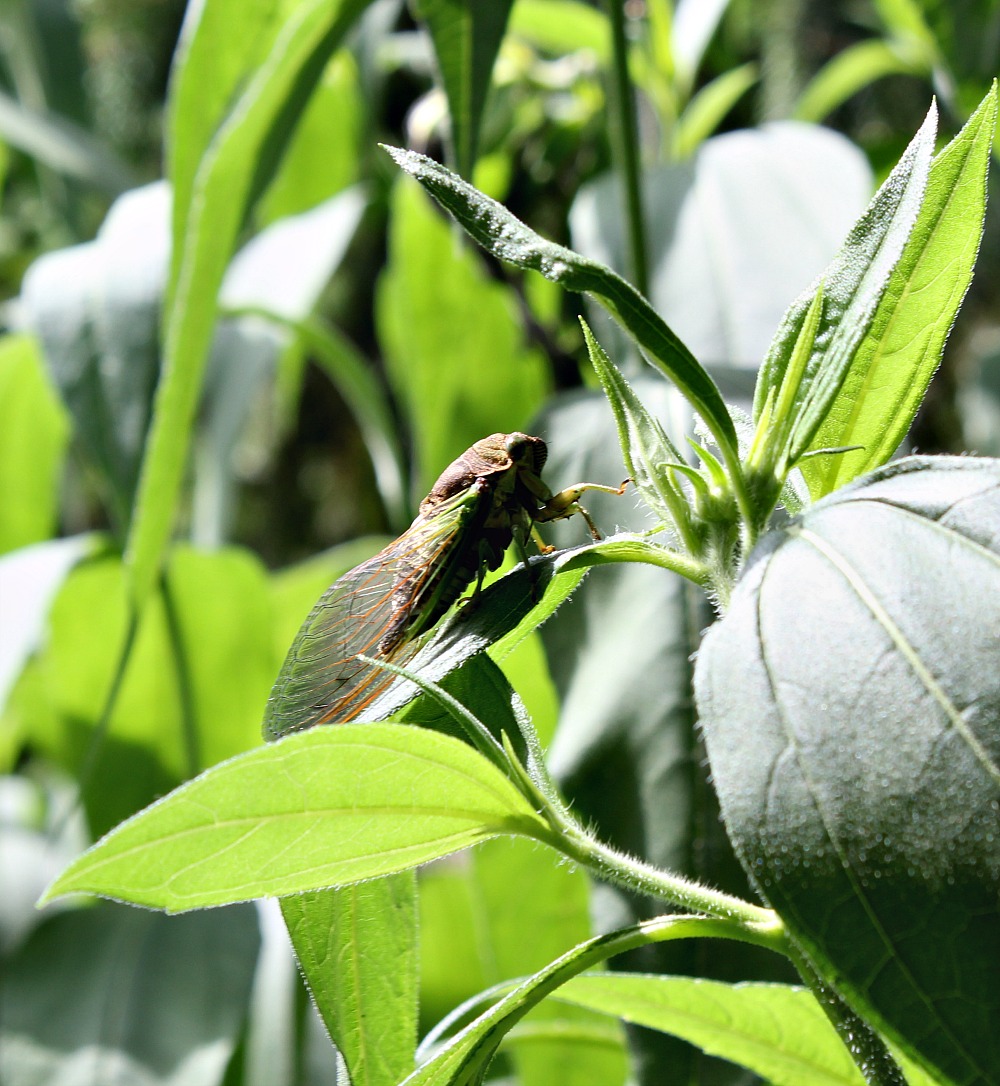 Since I planted zinnias in one of my raised beds this year instead of vegetables, I have had a host of guests this summer I don’t usually see or maybe just did’t notice before.

This is a shy and flighty female Black Swallowtail ‘Ohio Lepidopterists’.  She doesn’t come around often and is looking tired and a little ragged on the edges.  She rarely settles long enough for a photo, but took a short rest on this salvia which had already bloomed and no longer had flowers.  I wonder if she is nearing the end of her life. 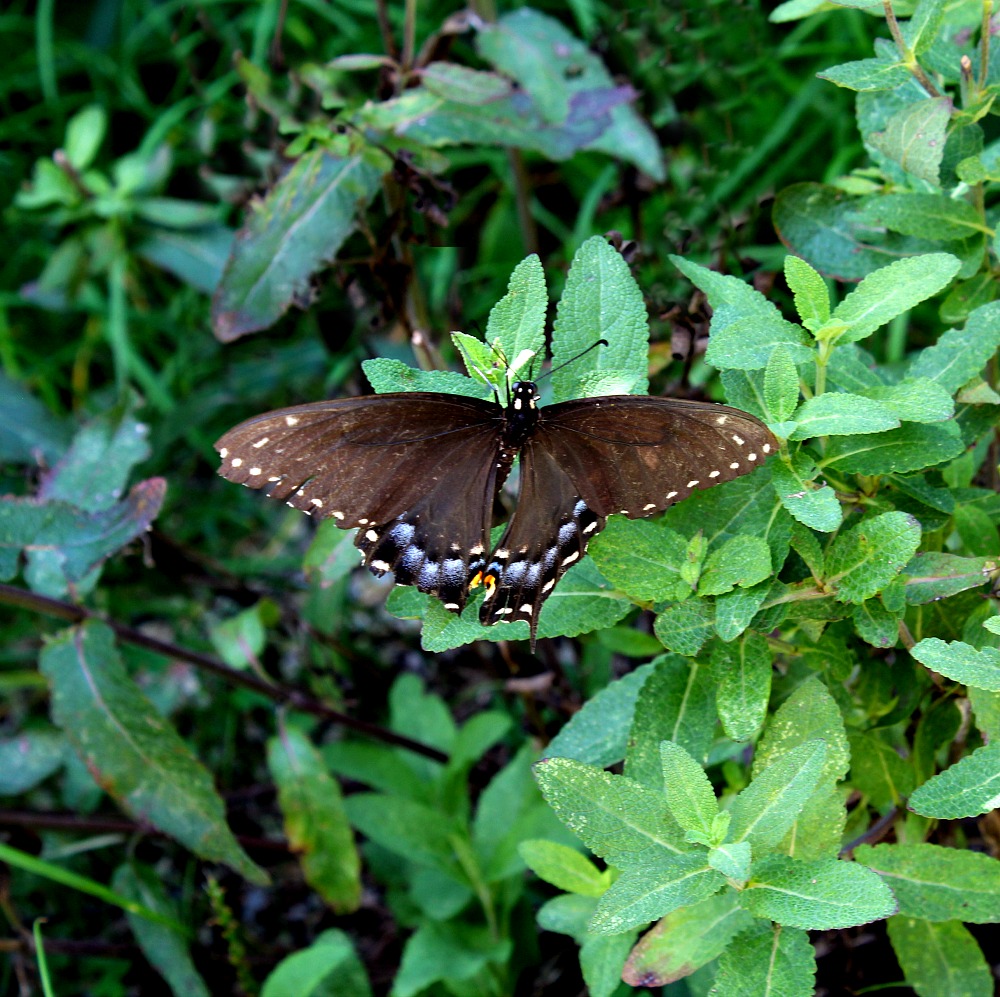 Here is another female who seemed to have much more energy, markings more distinct, colors are brighter, and her wings not so tattered. 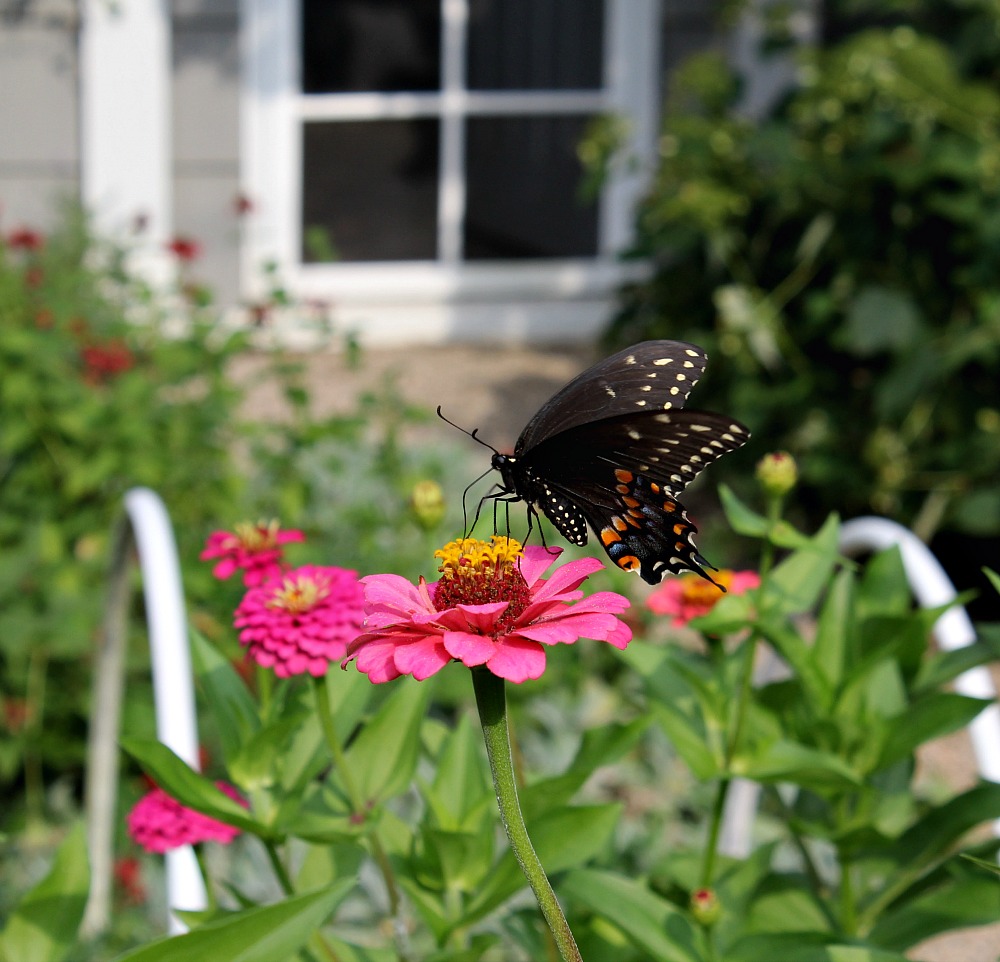 This next lady is a frequent visitor to the zinnia patch . . . the Eastern Tiger Swallowtail ‘Papilio glaucus’.  I’m rarely in the garden that she isn’t hanging around, working the room, and flirting with every flower she can. 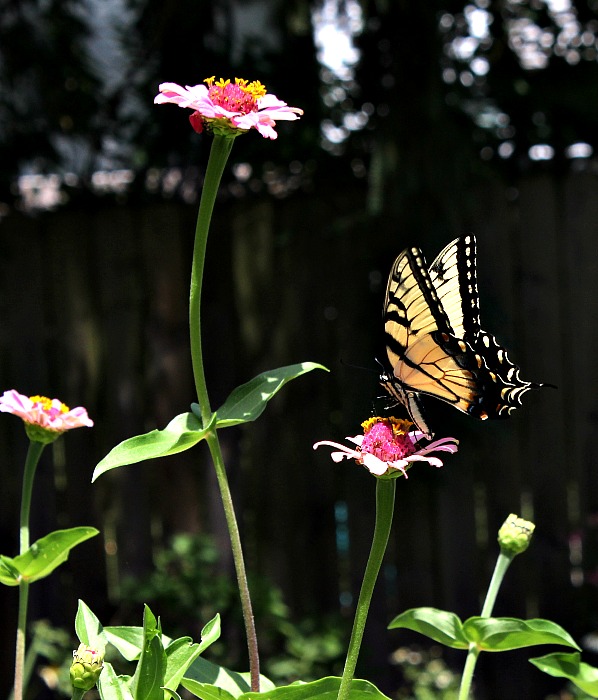 Of course there is the bumble bee who is the quintessential “party animal” . . . she hangs out continually and never goes home.  Bumble is always welcome here. 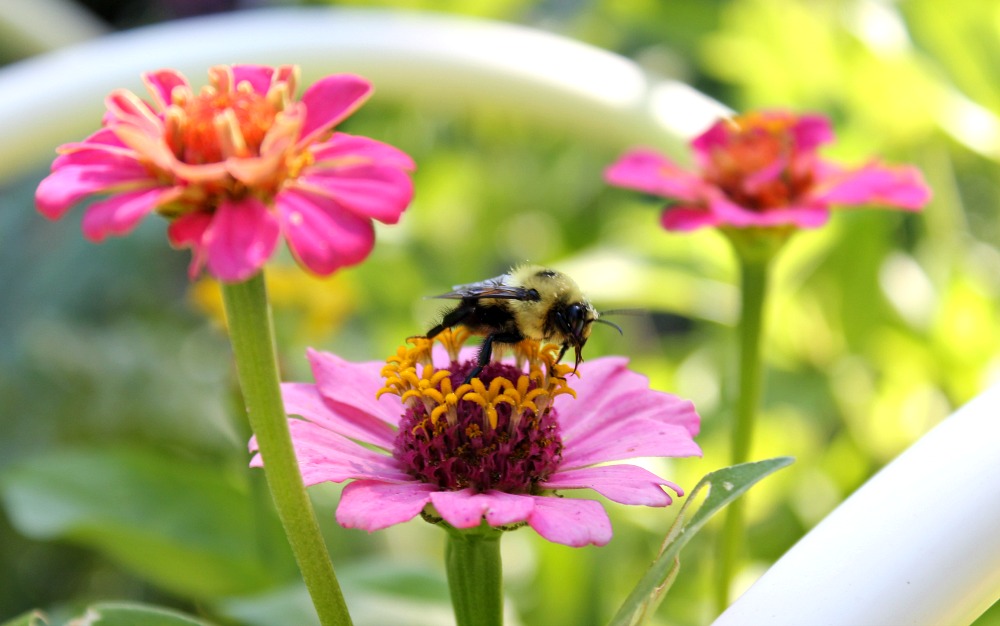 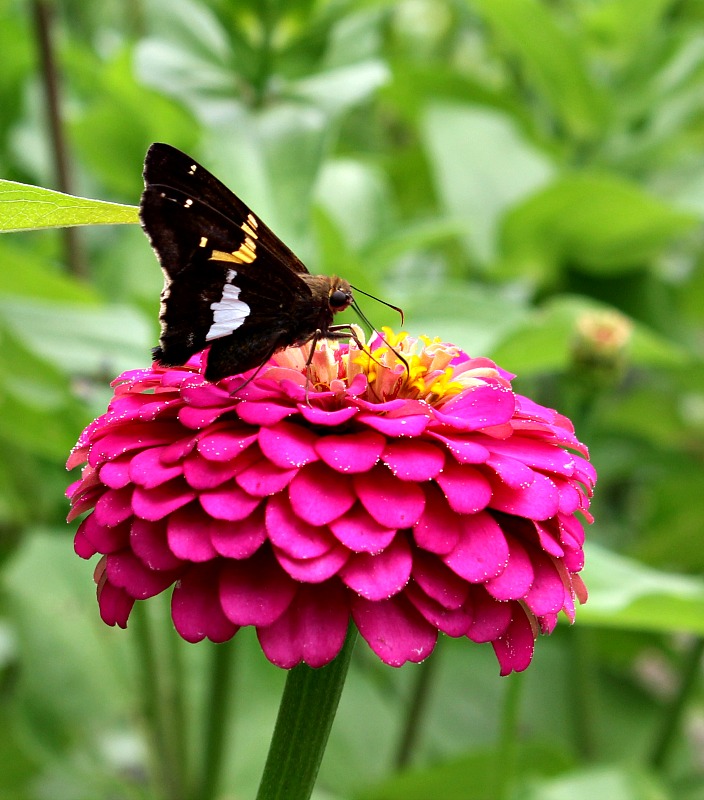 And then there are the party guests who bring the whole family and eat right out of your fridge without asking and things not on the menu.  This lady and her twin fawns have become the neighborhood mascots of sorts.  She strolls up and down the street, family in tow, eating whatever she desires, like she owns the place.  She particularly has feasted on my tomatoes and hostas.  Teaching her fawns to jump fences, she is friendly and not afraid. 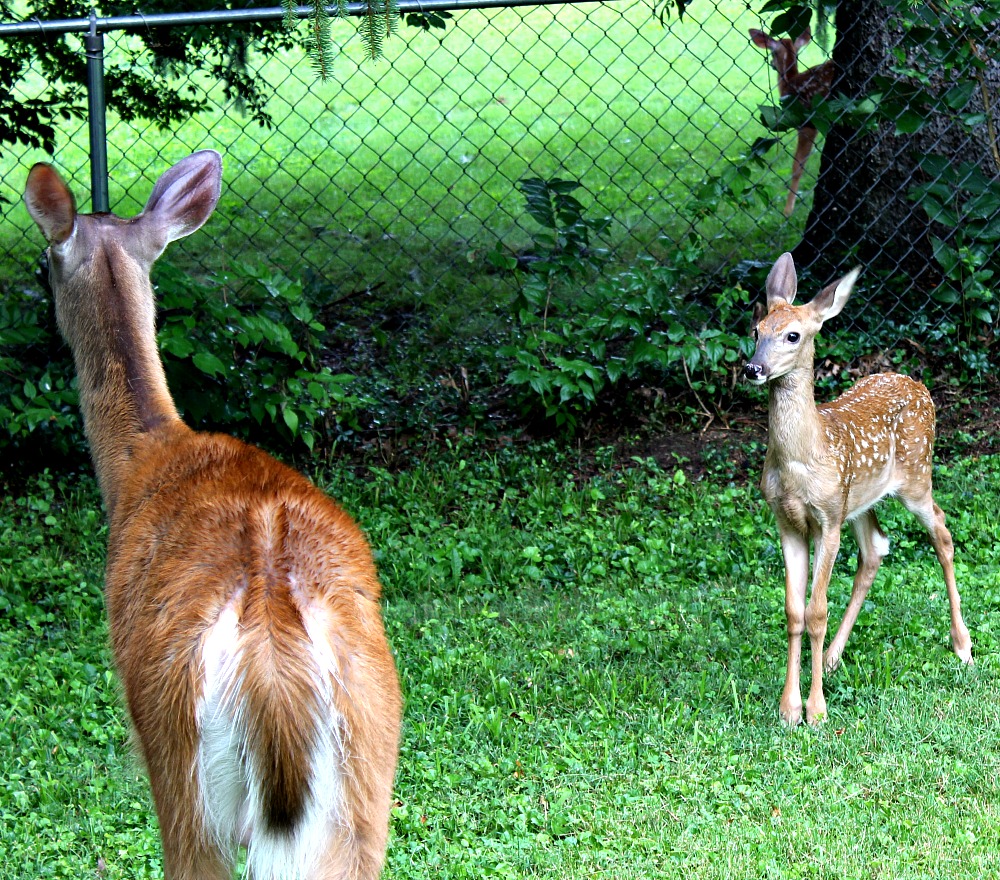 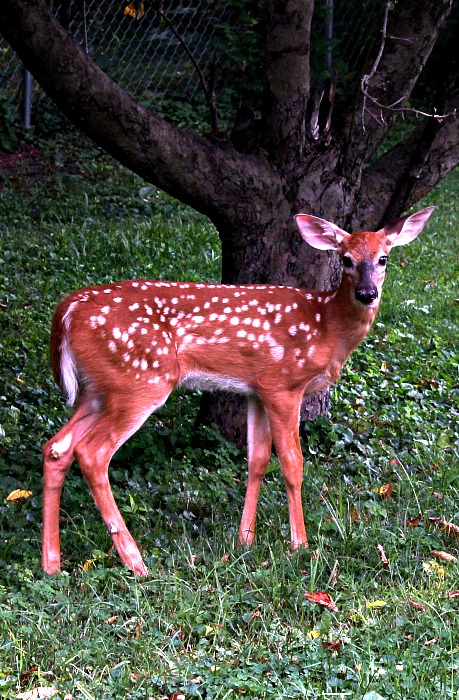 The Monarch ‘Danaus plexippus’, is also commonly known as the “king of butterflies”.  In my garden, the monarch is known as “Monty”, fondly named after Monty Don, the king of English gardening (in my mind), and host of Gardeners’ World.

Did you know that the monarch butterfly goes through four stages of life and has four generations in a years’ time?  Hibernating monarchs come out in February and March, migrate north and east > lay eggs > larvae (baby caterpillars) > chrysalis > butterfly.  They live 2 to 6 weeks and will die after laying eggs.  This is generation one.

The second generation is born in May and June.  The third is born in July and August.  The fourth generation, born in September and October, goes through the same process, but does not die after 2 to 6 weeks.  Instead it will migrate to warmer climates, like Mexico and California and live for 6 to 8 months, where it will start the process all over again.

I have seen more monarchs this summer in my yard than ever before.  Even saw a couple mating in flight.  They are always a welcome guest and show stopper. 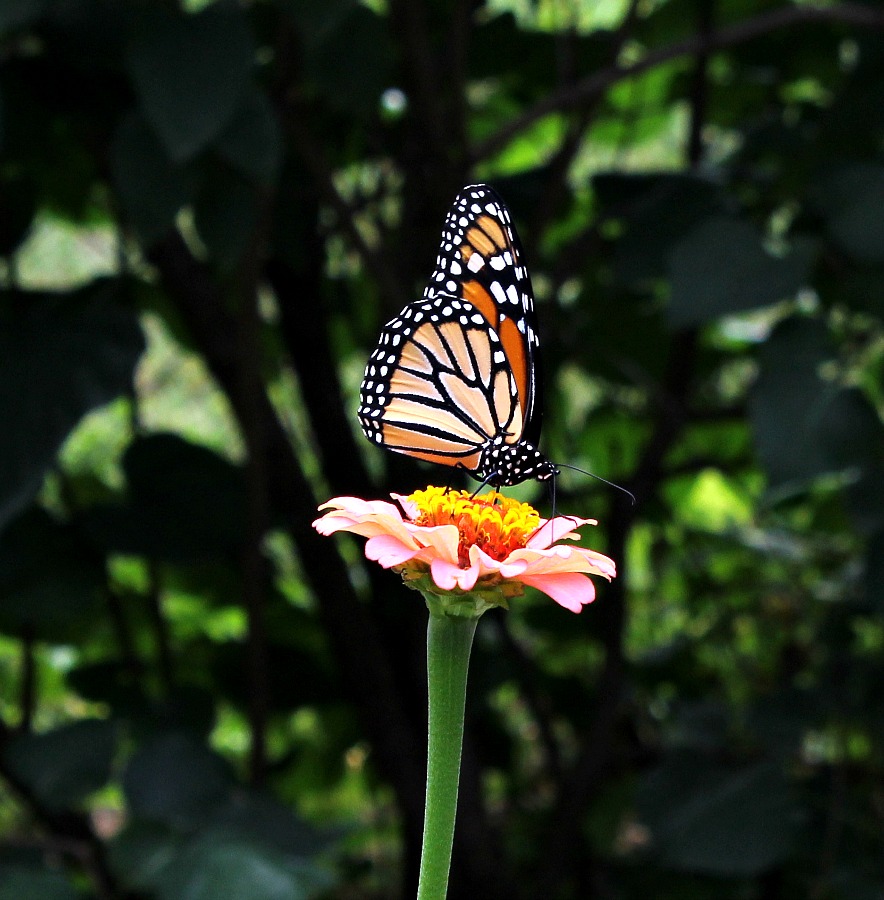 And last, but not least, we can’t forget Honey, who because of her fight against pesticides and mites, is always the most welcome summer guest.  Having once been a beekeeper, these are one of God’s creations that I adore the most. 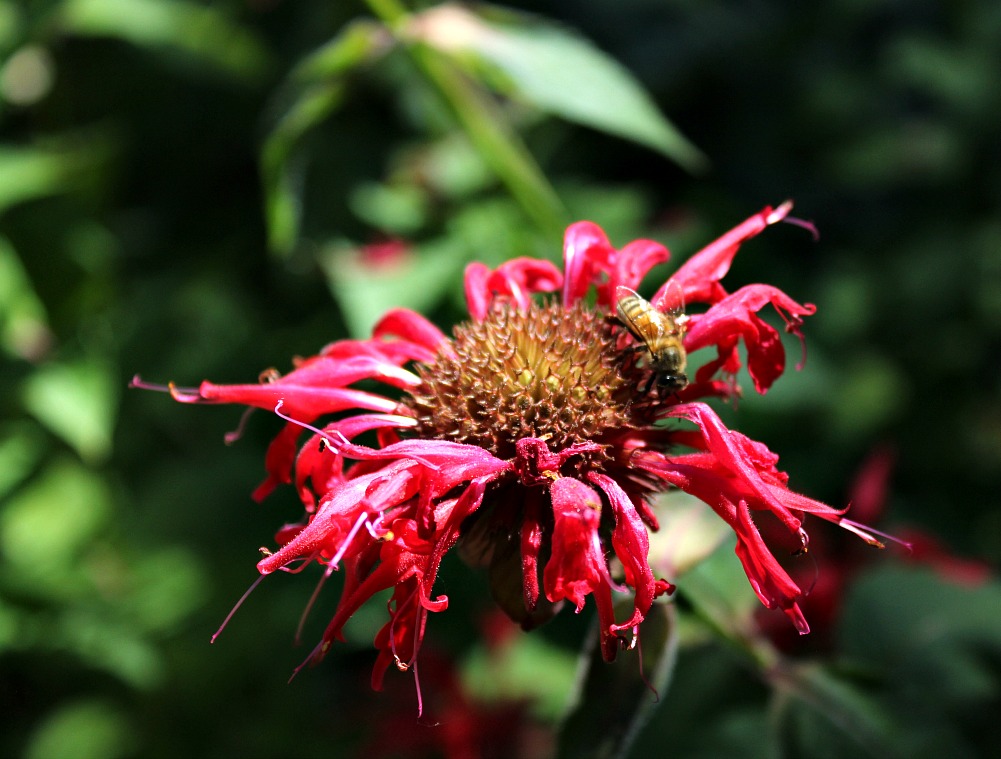 I’ve learned to always take my camera with me when I go outside . . .  because you never know who might drop by to visit unexpectedly.

Linking with The Propagator for “Six on Saturday”