I was looking to find a few larger pots for my yard and deck, and I didn’t want to pay top dollar for them.  I was hoping to find something made from a composite material so it would be lighter, and so that I could leave it outside year round without worry of damage from freezing and thawing weather.  It also didn’t matter so much what color it was, because I was planning on painting it to get a “cement look”.

I found pretty much what I was looking for at the discount store, “Big Lots”.  If you have one of these in your area, check out their garden pots.  They are very reasonably priced.

The first pot I purchased is about 2 feet tall and was only $18.  I had originally planned on painting it, but I liked it in my garden as it is.  All it needed was a light and airy grass planted inside. 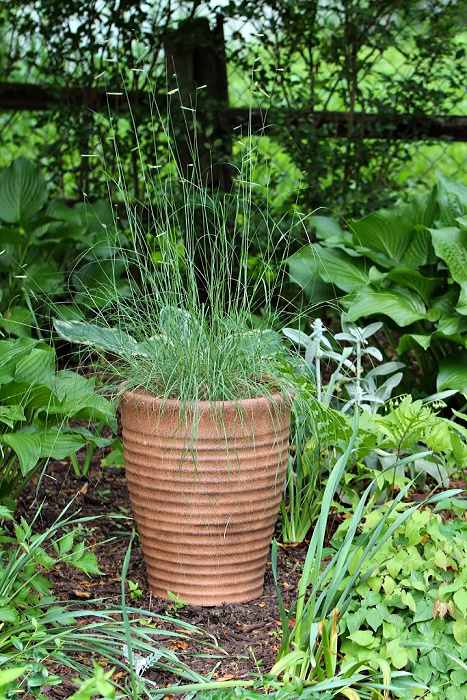 The second pot was taller and had a much larger opening.  It was perfectly fine with it’s beige coloring, but I wanted  a gray cement look.  It already had a nice “pitted” texture, which would lend itself well to converting it over to cement coloring. 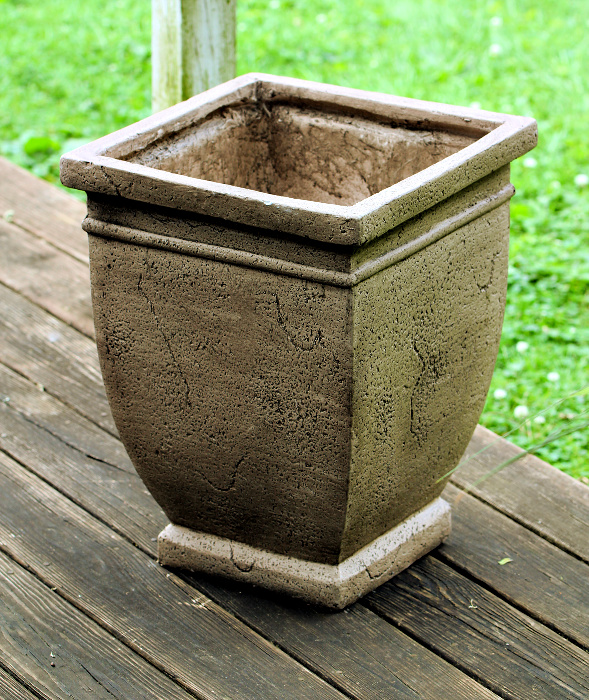 I dug out my gray house paint and brushed it on lightly, filling some of the pitted areas, and leaving other areas darker. 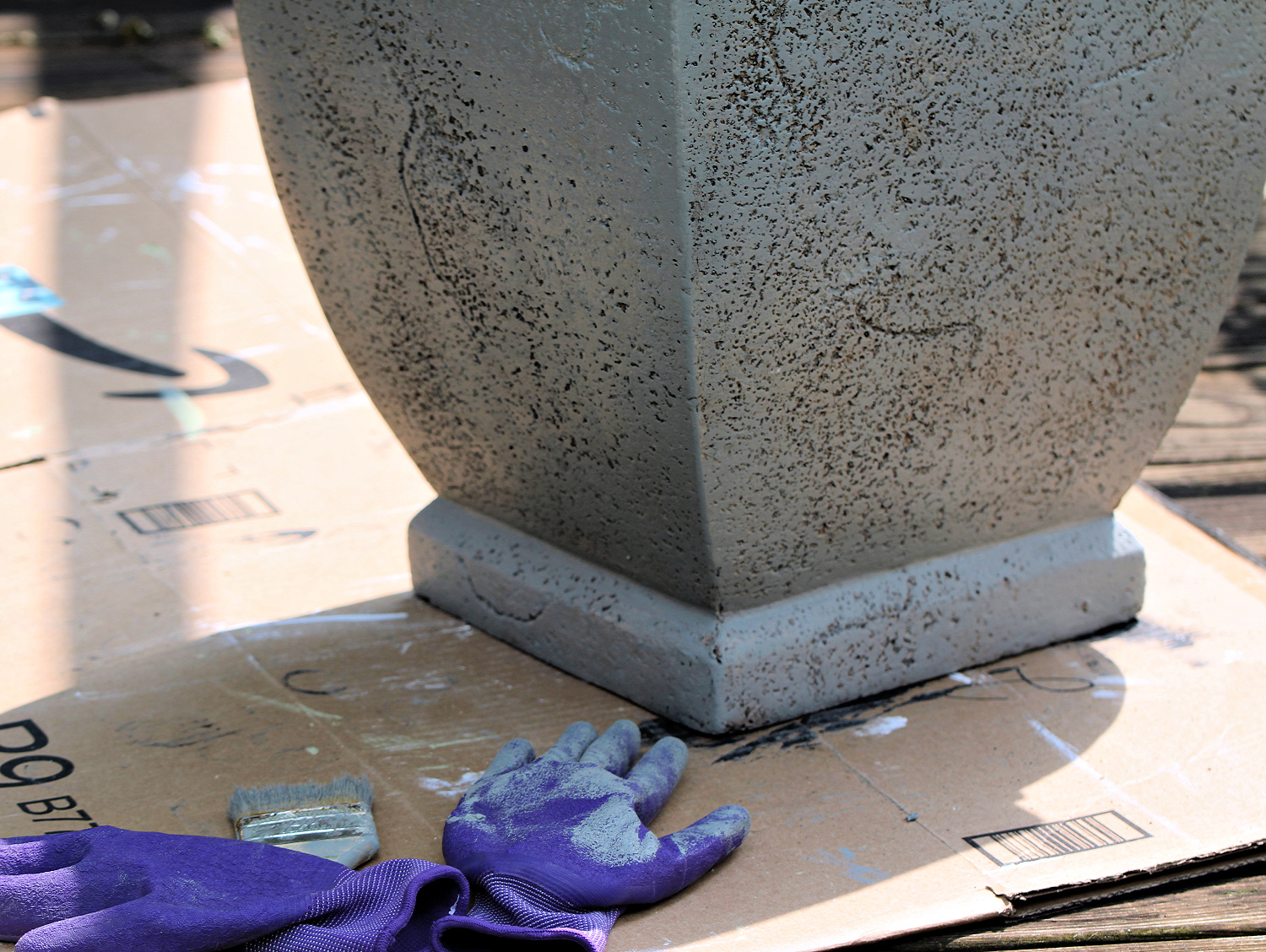 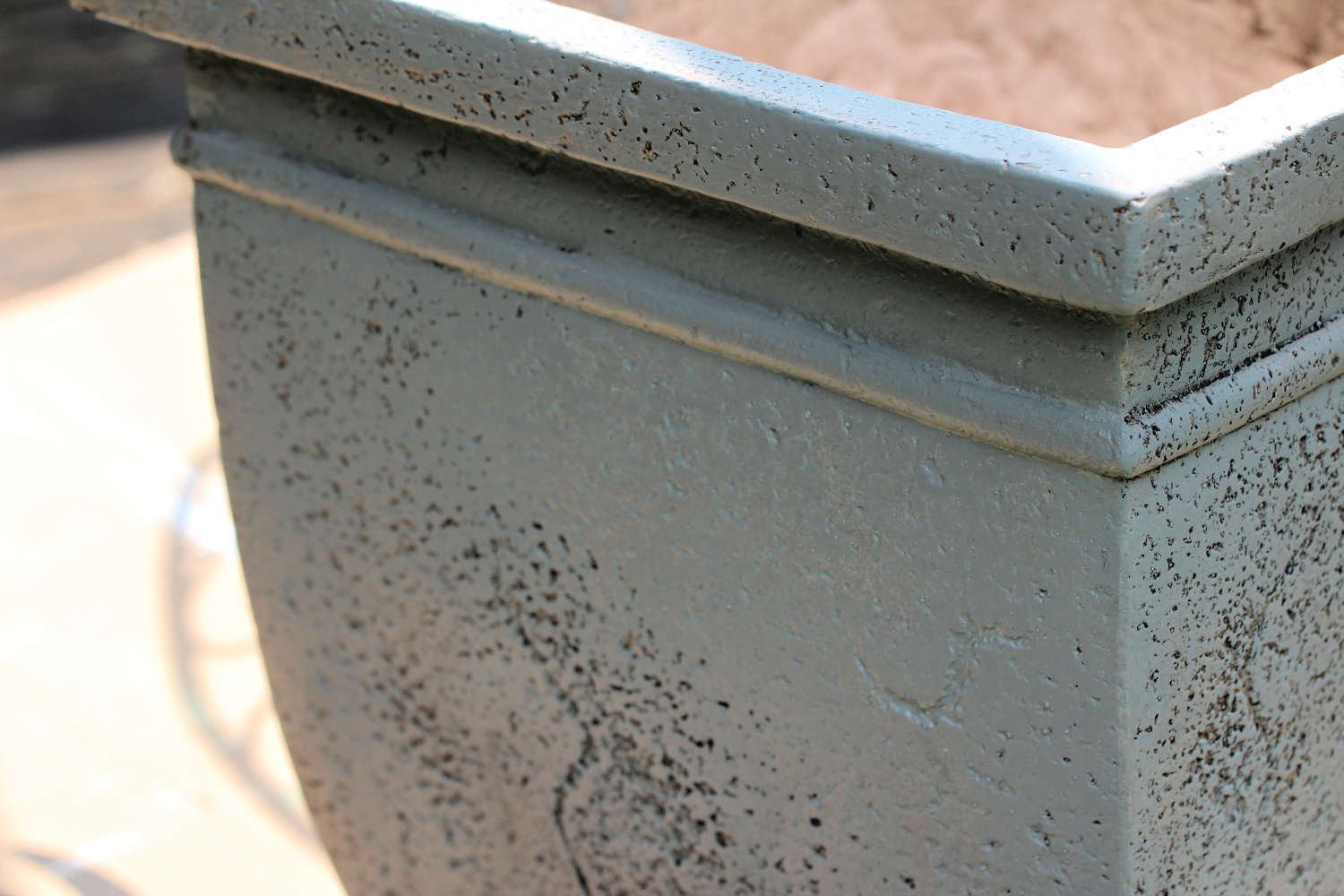 Then I lightly dry brushed on the light green paint that I used on my gates, to give it a slightly mossy look.  It looks a little blotchy in the photo, but you can’t mess it up.  Random and haphazard is the look you are going for.  Because you are using very light coats of paint, it dries almost as quickly as you work. 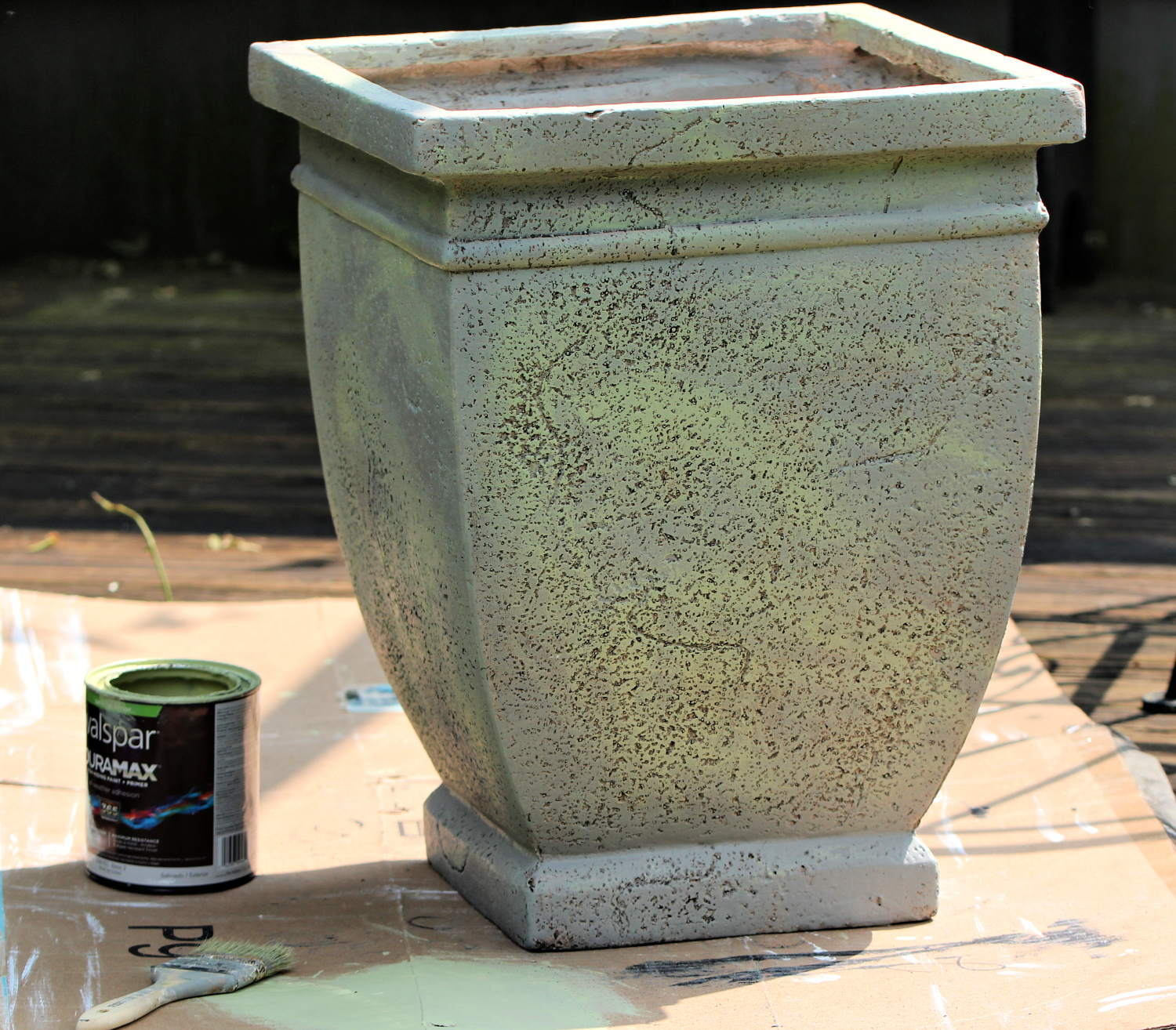 Next, I applied a light coat of dark wax, and also rubbed some dirt on it.  I finished by very lightly sanding to scuff it up a bit.

Here is the finished look, where it is setting next to a real cement planter. 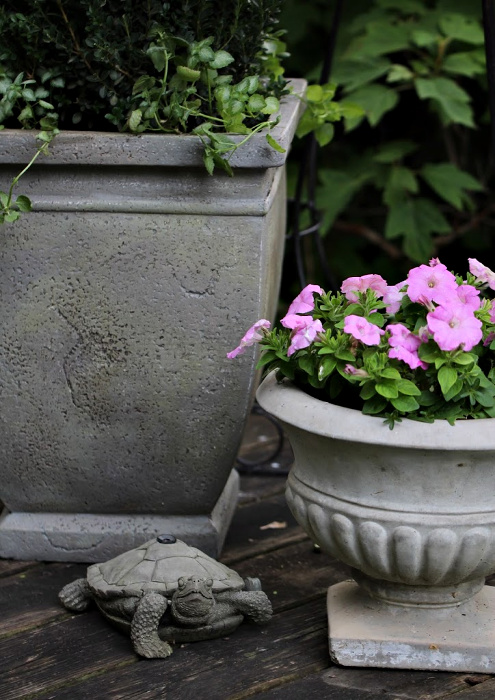 I potted it up with a boxwood that I attempted to clip into a ball.  I need a little practice on clipping spheres.  Not as easy as you’d think.  The best part is, it will grow out, and I can try again. 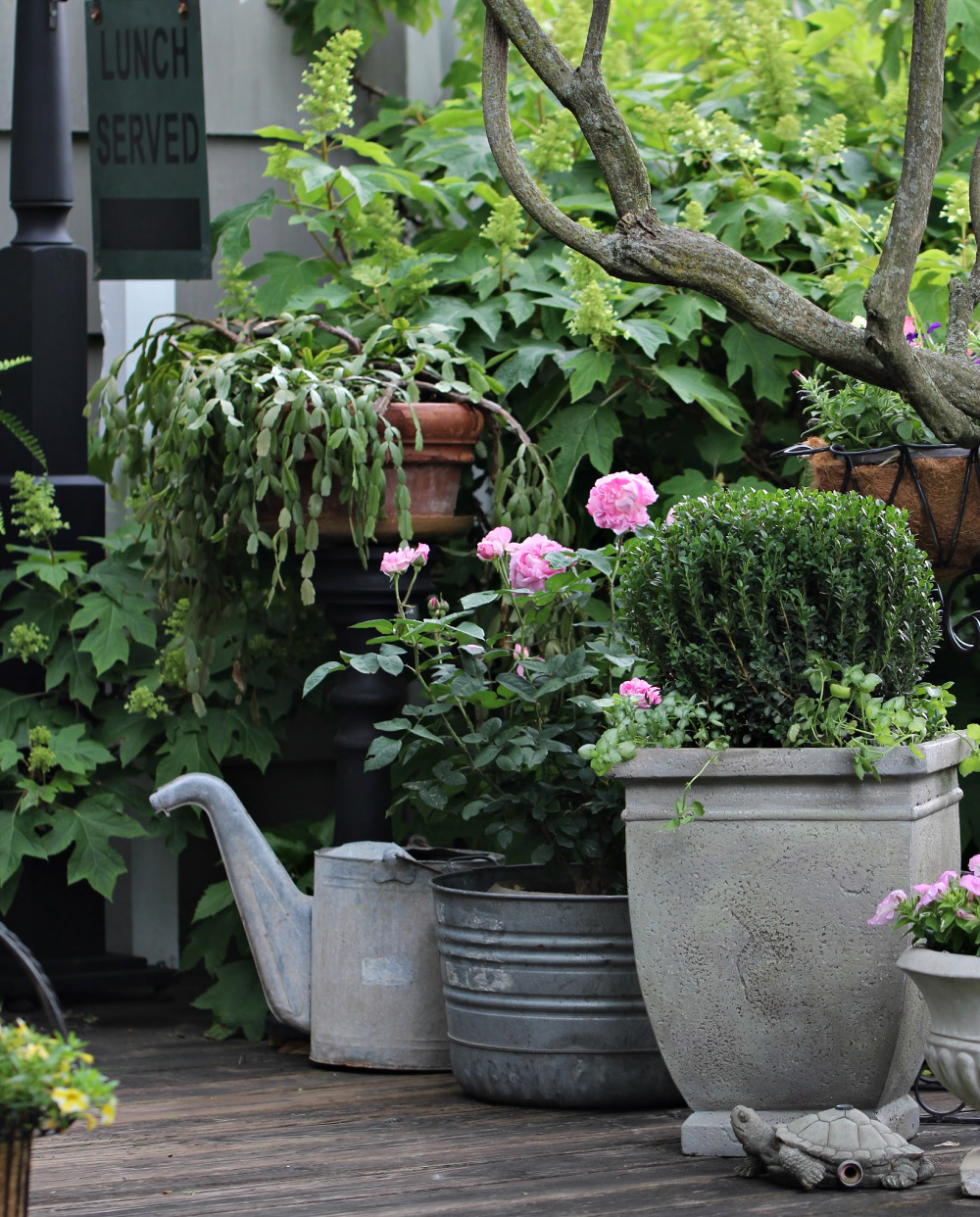 It sits nestled with a grouping of other potted pink plants at the end of the deck, under my wonky wayward wisteria that refuses to use the post for support. 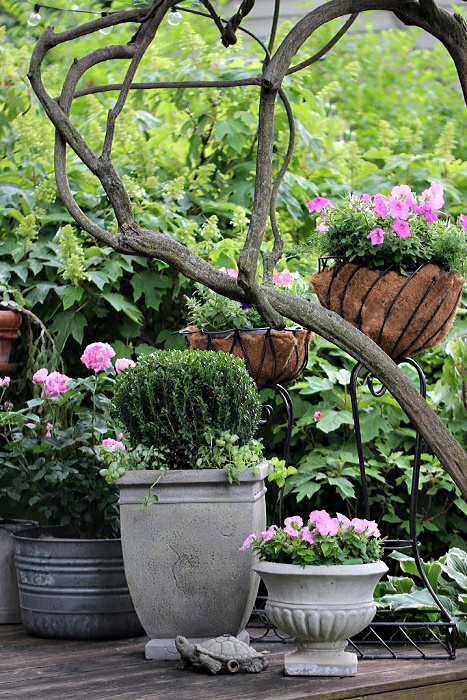 The new pots are made from some sort of plaster, so they will need to be over wintered in the greenhouse to prevent cracking.  Inexpensive plastic pots are also perfect for this sort of painting, and will give you a high-end look as well.  It’s fun to experiment and customize your pots and containers to the look you want. 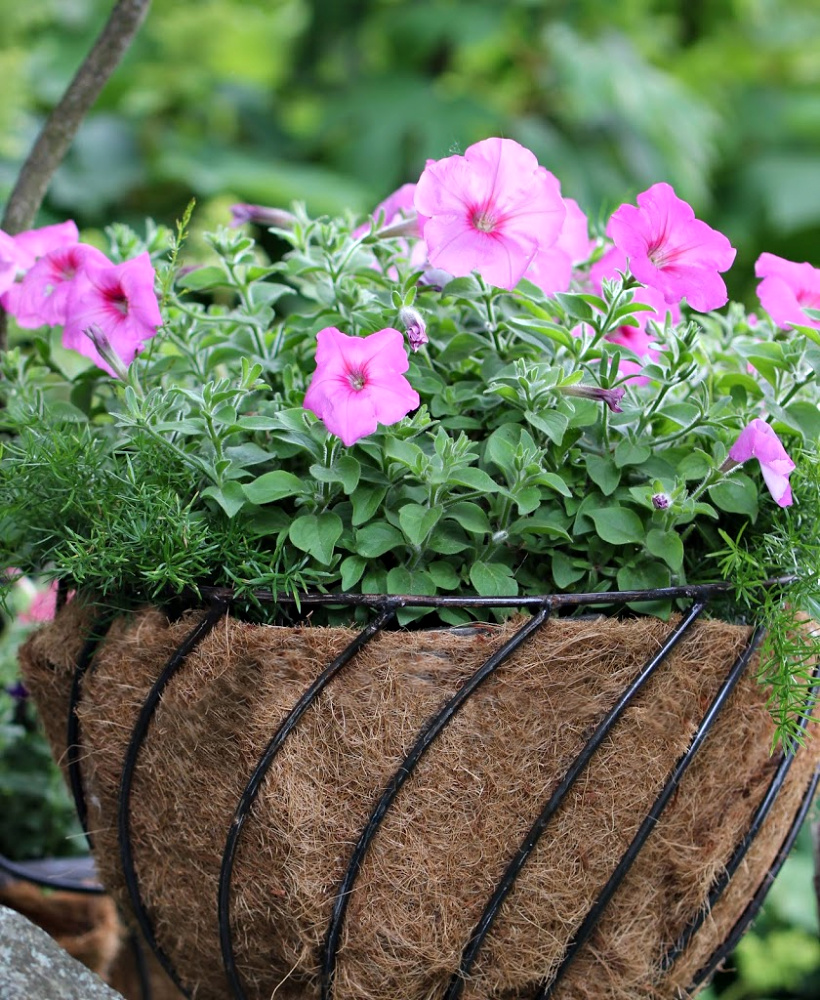