I have mentioned in the past, our neighborhood has a growing problem with deer.  They are so comfortable here, they bed down in back yards, and it’s not uncommon to see a whole family strolling down the sidewalks, sampling from every yard as they go.  There is not much I can do about what they eat from my front gardens, but I’ve been at war with them in my back yard for several years now.

For beauty and privacy, I’d been growing a privet hedge and also a long hedge of lilacs for a couple years.  But slow growing parts of the hedges have allowed the deer points of entry, where they could easily jump the lower areas.  I finally decided I’d had enough of them eating my flowers whenever they wanted and it was time to take action.  The other two sides of the back yard already had a 6-foot wood fence, so I decided to splurge on a 6-foot privacy fence to close off the remaining side with the slow growing hedges.

Unless you have a stunning background, when creating garden rooms, it is invaluable that the eye has a place to stop and rest.  A chain link fence and an ongoing view of all the neighbor’s yards, is not my idea of a pleasant backdrop.

So, last weekend, the men came to install the fence, and I couldn’t be happier with the final result.

Now, instead of the birdhouse on the old arbor being lost in the endless view of backyards, it has a backdrop to frame it and make it a focal point. 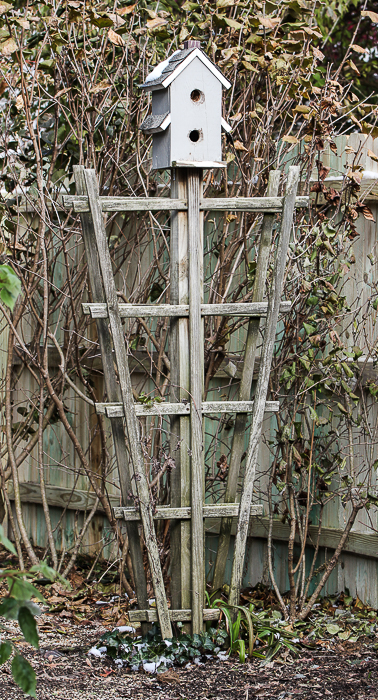 In spring, the fence will play a supporting roll, and allow the lilac hedge to take center stage and show off its glorious blooms.

In winter, the privet hedge will now provide night time lodgings for birds, with the fence becoming a wind break from the cold.

The picket fence that cuts the backyard in half, used to look like it ended in the middle of no where, but now has a finite end.

And I can still see the top of the beautiful shed that is two yards down, without everything in-between.

While outside taking these photos, Moby got himself into a tangle with a raccoon.  It was a frantic time as I struggled to separate them without getting bit by the raccoon or dropping my camera.  Dachshunds are very aggressive when it comes to wild animals, and Moby was most reluctant to give up the fight.  Finally, after what seemed like forever, I was able to separate them long enough for the raccoon to slink away and crawl under the shed.  Moby was immediately given a bath and rushed to the vet, where the bites on his nose and neck were tended to.   He was put on antibiotics and pain meds and the vet said he was a lucky dog.  I can only imagine how much worse it would have been if I had not been outside at the time.  So, while the fence will help with the deer, unfortunately, it will not keep possums, raccoons, or skunks out of the yard.

Peacefully recuperating on the back of the couch, but I seriously doubt he learned his lesson.  If you look closely, you can see the bite on his face, halfway between his eye and his nose.

I'm the mother of one adult daughter and a dachshund dog, named Moby. I work full time as a medical secretary and run a part time Etsy shop.
I define "spare time" as every minute I'm not at my full time job. It's "my time" to do the things I love most, which consists of gardening, home decor, creating items for my Etsy shop, around-the-house fixer upper projects, reading, and friends and family. This blog is a journey through the spare minutes of my days. I can't promise you exciting, but hopefully interesting enough that you might want to come along.

in my spare time