I saw this Creamy Tomato Bisque recipe in the September issue of Country Living magazine and it sounded good. But then I find every recipe sounds good when I’m hungry.

It called for 3 28-ounce cans of crushed tomatoes, and I just so happened to have a large batch of fresh tomatoes from the garden that needed to be used up.

I used to grow 20 plants and canned any tomatoes I grew. Now, I only put in 8 plants, and try to make meals with them instead of canning. Sometimes I eat the meal immediately, and sometimes I freeze it for quick and easy winter meals later on. Either way, whether canning, or using immediately in a meal, the tomatoes have to be put through a hot and cold water bath to loosen the skins. Not my favorite thing to do, but by far the easiest way to remove the skins.

Once past this step, the bisque goes together quickly. The recipe makes a large pot of bisque, but I think I ended up with more tomatoes than the recipe actually called for. My bisque didn’t seem as thick as I expected, so I added some extra leftover cream, and also thickened it with a water/cornstarch mixture. I also didn’t think it had as much flavor as I expected, so I threw in a few extra herbs, some Worcester sauce, and a little sugar. After the sugar addition, I thought it was just right, as it seemed to enhance the other flavors.

I had recently purchased a new cast iron Dutch oven, and I was anxious to try it out. So, while the bisque was cooking, I threw together this quick 2-hour no knead bread.

Using a cast iron Dutch oven with the lid on during most of the baking time, creates steam inside the pot, which in turn creates the hard crust we all love.

The finished bread is as impressively beautiful as any bread from a bakery. This is a simple white bread with only 4 ingredients, but I also thought this recipe didn’t have as much flavor as I’d have liked. There were hundreds of comments on this bread following the blog post and I read many of them. Since this is such a quick and easy bread to make, I’ll be experimenting with some of the comment ideas to achieve more variations and flavor in the future.

The bisque and bread make a warm and filling Sunday fall supper.

The recipe makes enough for several leftover meals, and I froze some of it for later. The bisque will keep in the freezer for up to three months.

The bread is best warm, right out of the oven, and is perfect with any fall meal.

Since I didn’t think the bread was as good the next day, I did use the leftovers to make homemade croutons. These croutons are wonderfully seasoned and make a great topping for either salads or leftovers of this tomato bisque. 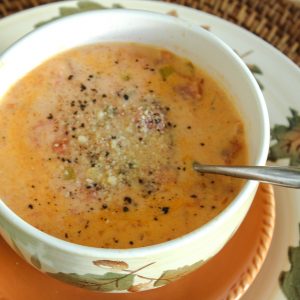 I did not add the saffron threads since I have never tasted it, and didn’t want to risk adding a spice I might not like.