Last summer, we had a doe and her twin fawns that lived in the neighbor’s yard while they were on vacation for a month.  During that time the mother taught her fawns to jump chain link fences and travel the neighborhood.  It wasn’t unusual to see them strolling down the sidewalks at any given time of day.

Fast speed to this winter, and the fawns have grown, and the herd has grown to a size ranging between six and seven. 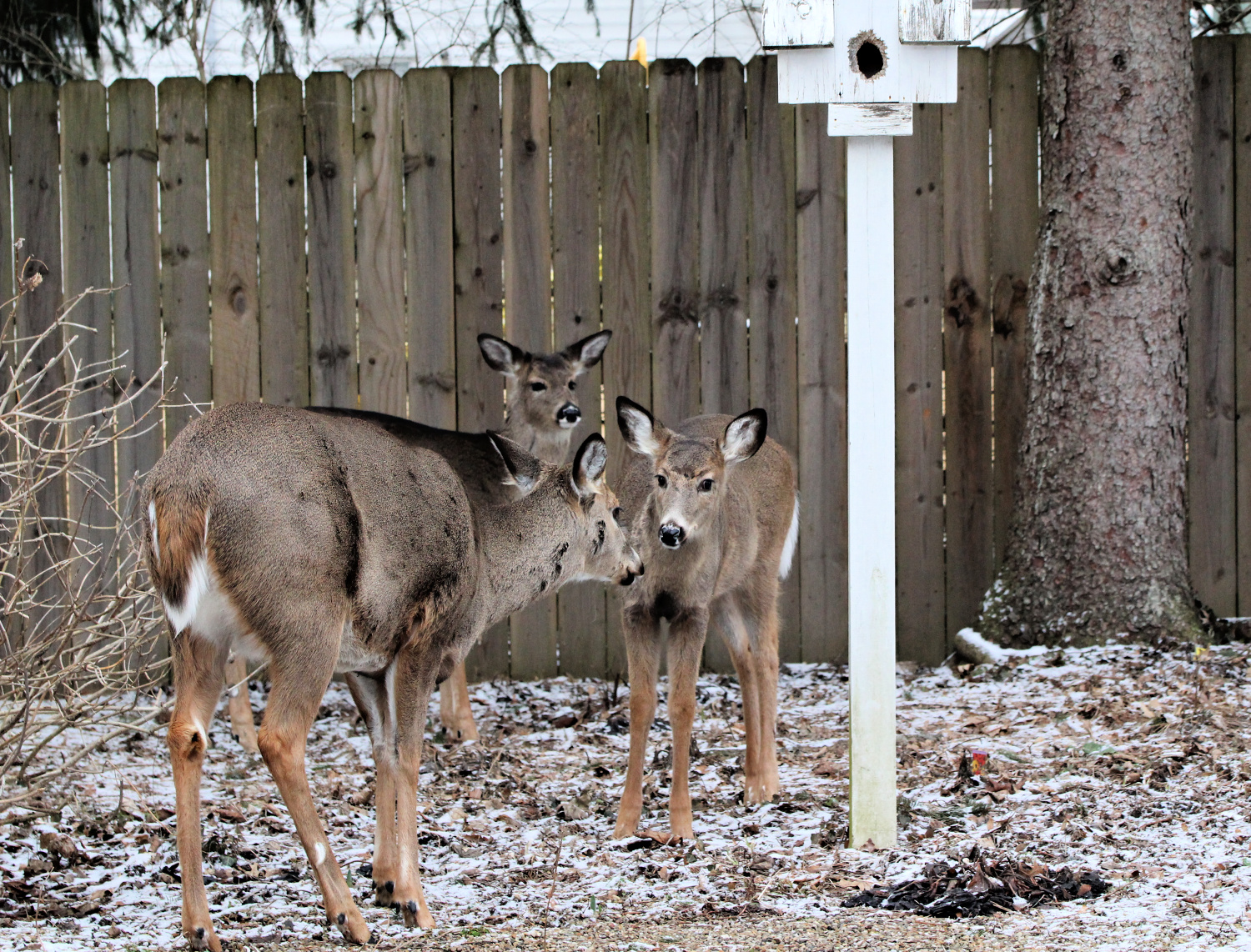 This family of three were hanging out on the other side of the fence eating off my neighbor’s apple tree. 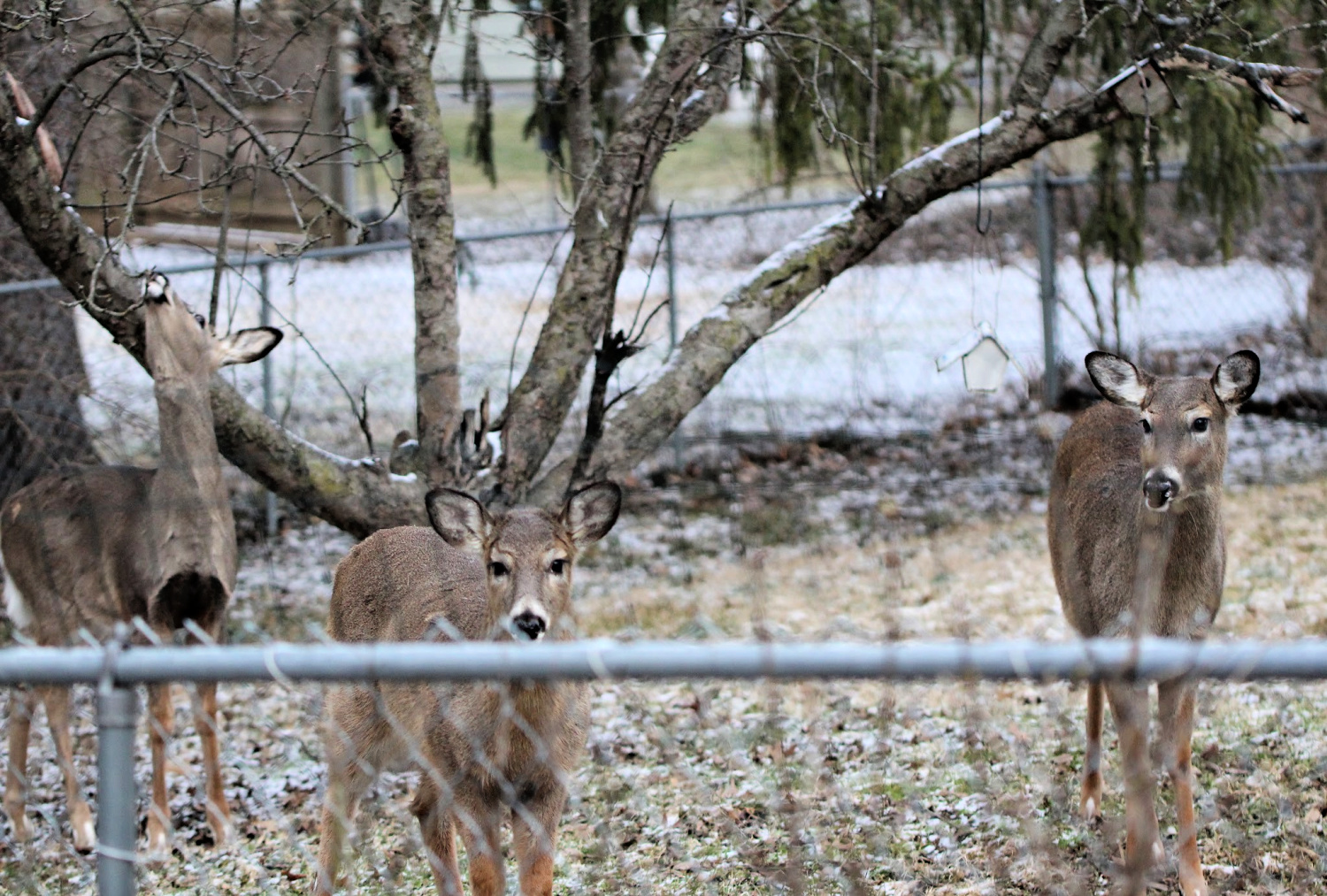 This is the mother and I was only standing about 10 feet away from her when I took this picture.  She was not the least bit afraid or intimidated by me as I took these photos. 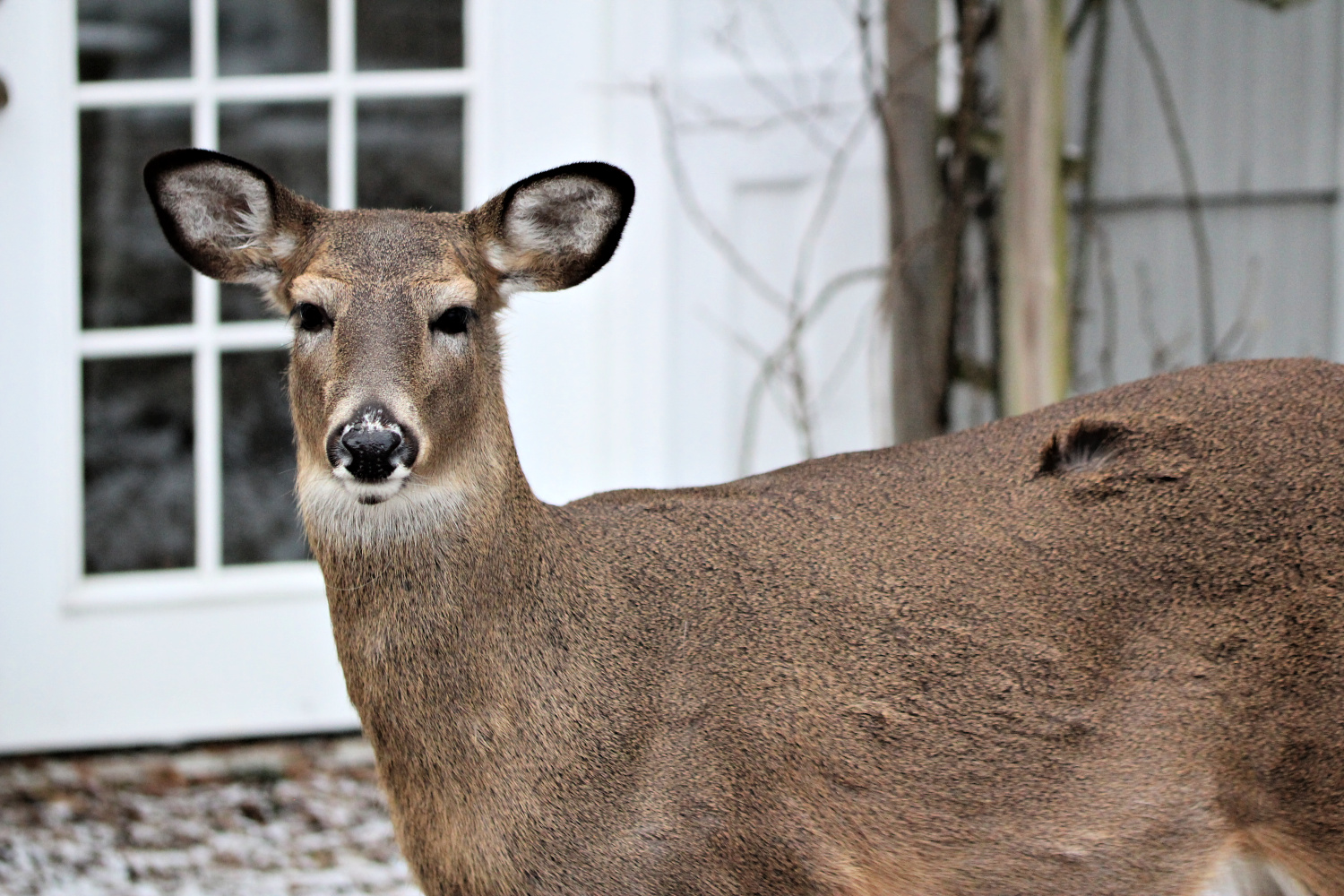 I sent Moby, my dog (a dachshund), out to chase them over the fence.  The fawns went over, but the mother just went round and round the yard, as if to say she wasn’t leaving her territory.  Eventually, Moby gave up on them and everyone coincided peacefully.  That was discouraging.

One would think I live in the country, but I am in the middle of a rather large metropolitan city.  Every year I seem to have a problem with a different critter.  If it’s not raccoons, then it’s possums, or skunks.  Last week, I even saw a fox in my back yard.  That made me glad I don’t keep chickens anymore.  But who could not just love this face? 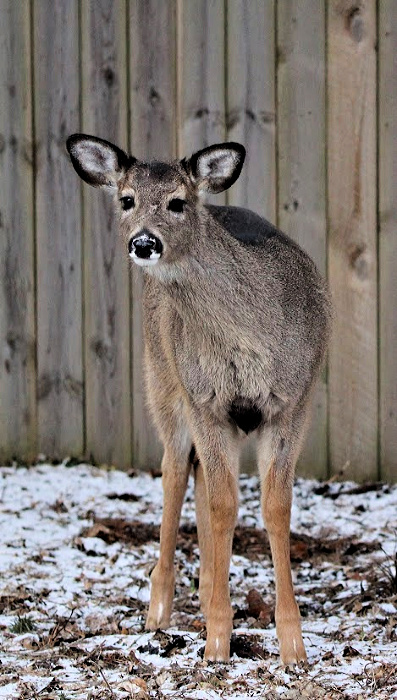 Spring has no means arrive here yet in central Ohio and the ground is still barren and bleak.  But soon, bulbs will be sprouting up everywhere, and I want to deter the deer before the tasty plants appear on the scene.  I lay up nights trying to figure out how to keep them out of my yard.  I came up with a few simple solutions, all of which are temporary until I can do something more permanent when the weather warms.  These next pictures are not so pretty.

This is a small spot between my neighbor’s yard where the fence is lower and the privet hedge at this end has not grown up as much.  A quick and ugly fix for now is just to stack my plastic green Adirondack chairs there to keep them from coming and going through here. 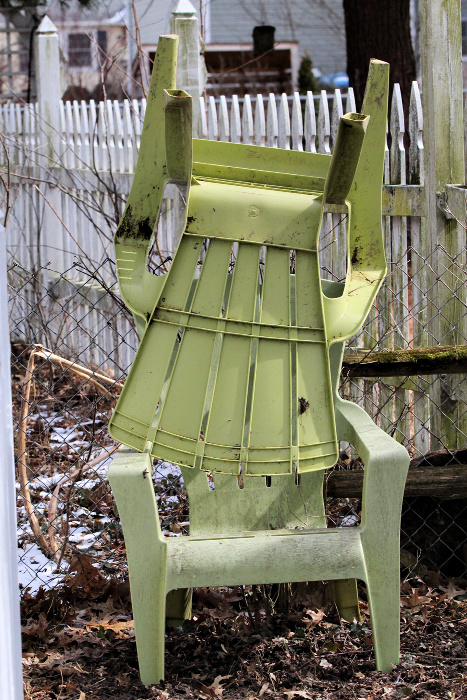 The other place they can easily come over, is the back portion of my yard, where they most like to hang out.  I have a long row of lilacs along the fence that were planted three years ago.  Two of them have barely grown and probably did not survive the winter.  This low spot is their favorite point of access from the neighbor’s yard.  With all the rain we’ve had this winter, and with everything always muddy, they have totally destroyed my yard.  The bright yellow nylon string is not pretty, but it has worked so far. 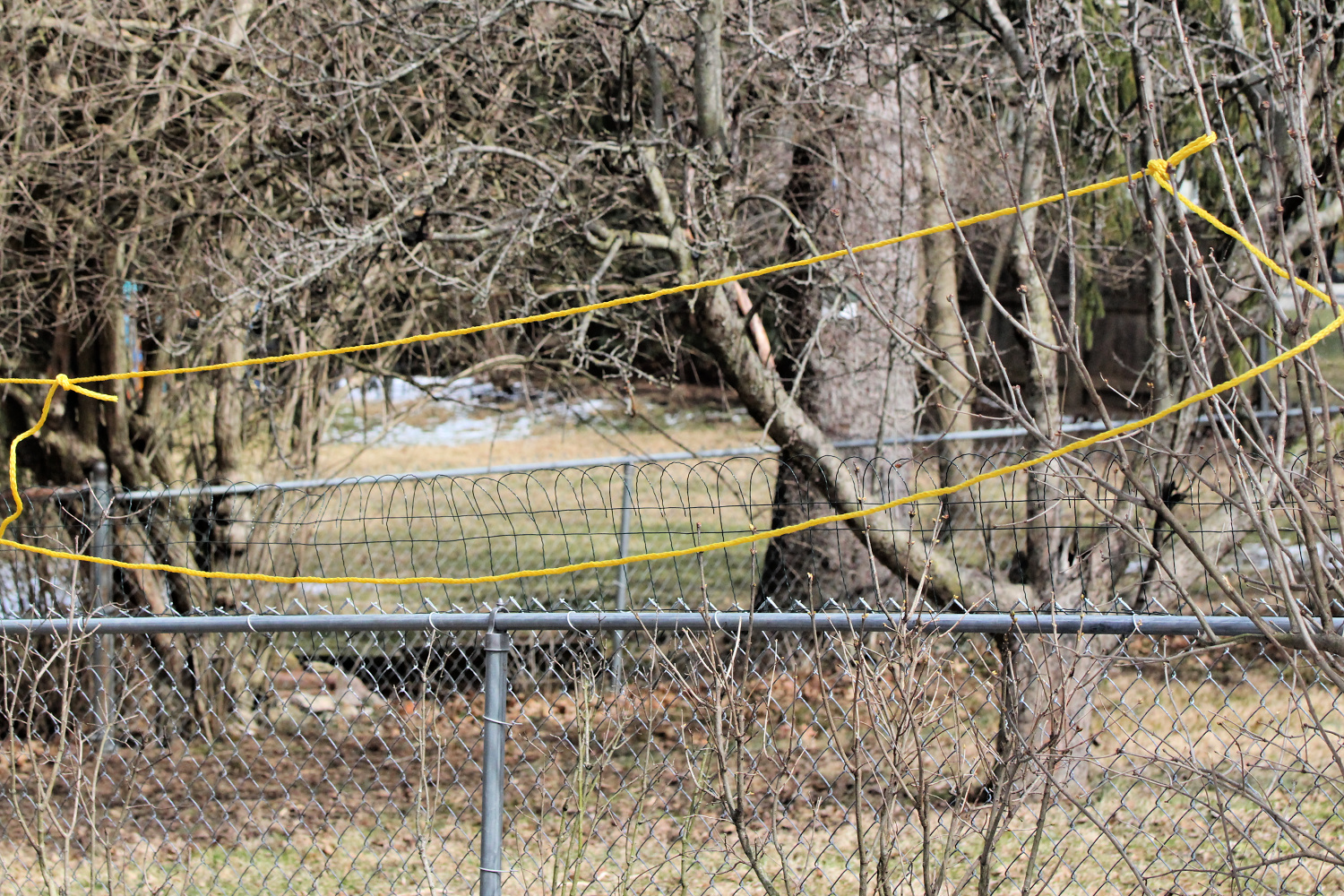 This last point of entry is from the front of the house and a little prettier.  I bought an inexpensive black metal arbor that is temporarily tied to the chain link fence .  Once the ground thaws, I will drive the rods into the ground for better support and eventually paint the chain link fence black to match.  You can barely see it, but I hung a black metal chandelier with crystals from the top of the arbor, just in case they had any ideas of trying to jump through the opening.  One side of the arbor has large forsythia bushes growing and the other side has a large oakleaf hydrangea bush.  There is honeysuckle growing in the forsythia bush, so I just wound it around the arbor to give it a new area to stretch. 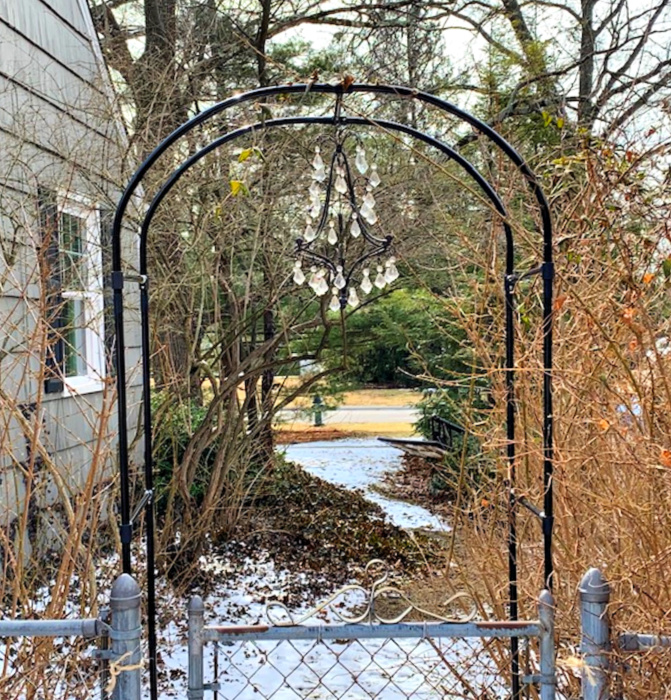 Fingers crossed, it’s been a week, and I’ve seen them next door, but so far I haven’t seen them in my yard.

Does anyone know if deer give birth every year?  I’ve googled it, but can’t find a straight answer.  Since they usually have twins or triplets, this herd could be growing again soon. 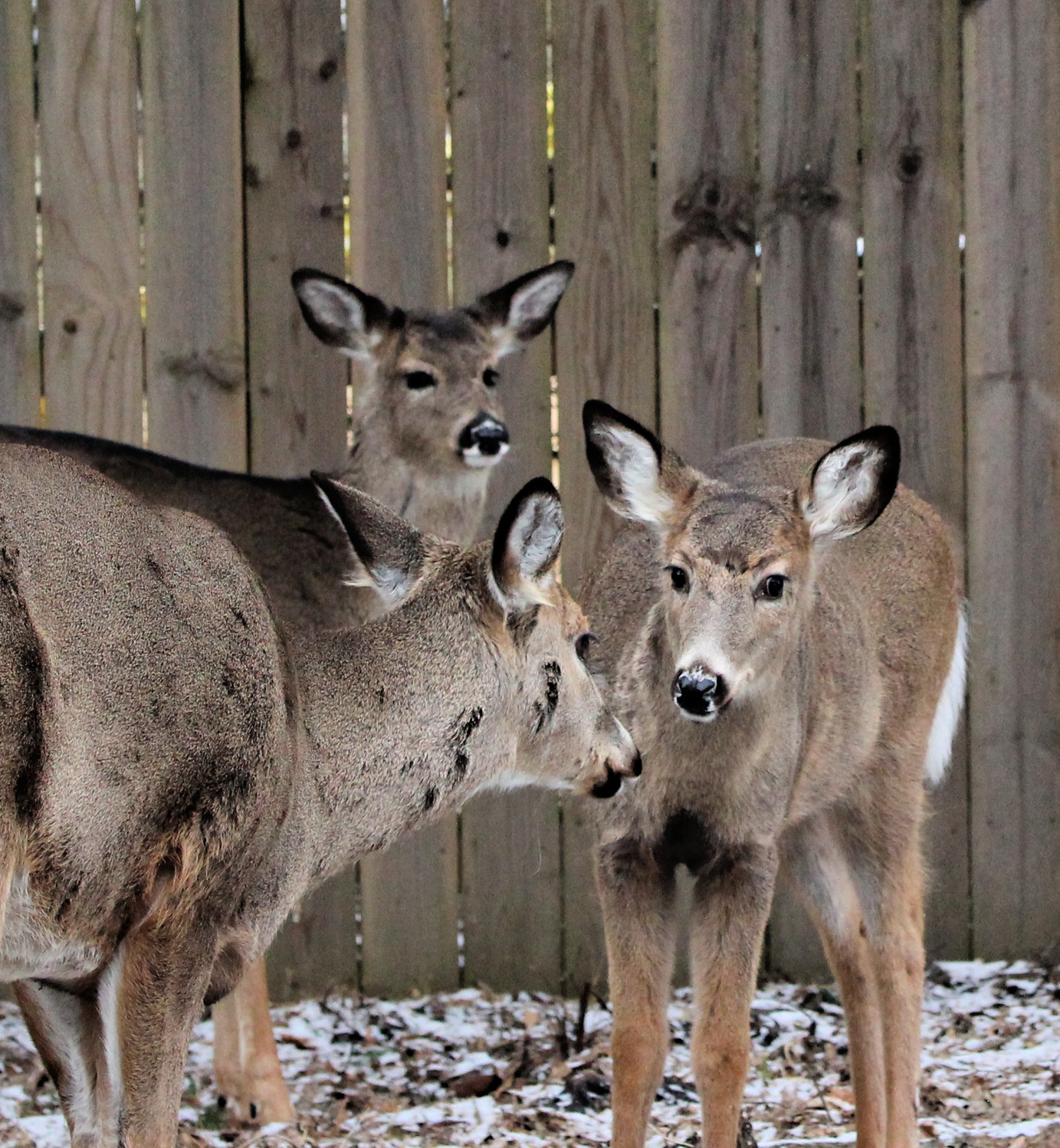 I feel like I’ve been afraid a lot lately. I’

The squirrels here are too smart. The have figured

You have not chosen me, but I have chosen you. Jo